The open window is my only source of cool air and there is no breeze. Staring into the darkness unable to rest, I resign. Better to read than stare at the ceiling for hours.

I flick on the lamp and resume my current supernatural suspense. 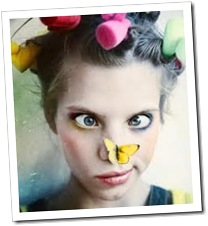 Almost immediately I am visited by a butterfly. Cool! It (He? She?) lands on my nose and seems to be staring at me with its orb-y, stickin’-out eyes. Not a moth; a butterfly – the small monarchy looking one. I stare cross-eyed back at it, wondering why it’s awake this late at night. G-d alone knows what the butterfly is thinking. It must have something to do with rotating antennae. This is so weird I fight the compulsion to brush it away and we stare at each other. It’s still better than looking at the ceiling.

I have always felt that personal experiences with animals proved that a direct connection to the realm of magic and alien life was possible, like a kind of message from the universe, or a mystic calling. It’s happening to me again with this butterfly. When I was nine I thought about such things all the time. Always hoping for another sign of the magic, I took silver linings seriously, wanting to know if there were any golden linings. 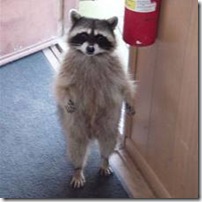 Lately, it has been raccoon’s. A mama coon with four babies visits us every night, early enough to be entertainment with dinner. I have learned that giving them some leftovers from the fridge keeps them from turning over the garbage cans. I know the dangers and keep my distance but I get to watch. What intrigues me is the eye contact; they look right into a particular part of your soul, transmitting an extra-sensory warning: “If you do anything to scare me, I will never trust you again.” It’s a contract, and I obey. Besides, what if they can hear my thoughts? “Aw, she thinks I’m cute.”

But Babs the butterfly is sending me sweet nothings and we’re becoming friends. I felt a deep relaxing sigh well up from the depths, and right on cue Babs gently takes her leave and saunters, as only butterflies can, out the open window. Is it my imagination or is it cooler?

Yep, it’s cool enough to put down the unfinished fiction and turn out the light.

Was that magic? Coincidence? Alien contact? D, none of the above? I drift into the unknown buoyed on a breeze from hundreds of black and orange fans.

Those of you who have

discovered Pinterest already know of it’s addictive nature. What you may not know yet, however, is its ability to make you stop what you’re doing, and go redecorate a room in your home.

I am a fairly new member, and this weekend was driven to go through the garage in search for bed frames and fabrics. Images of what I had seen on Pinterest boards earlier in the week had infected my mind and I was unable to resist the temptationn on eof

Switching out the bed in my room, I put together the antique headboard that had been in the garage for years. Oh no! A  deep scratch! Wait; I know what to do… what was it? Quick – check out household tips of my Pinterest followers’ board’s for the solution.

Yes! A walnut meat. Strange but true, rubbing the walnut over the gouge concealed the damage enough to celebrate. 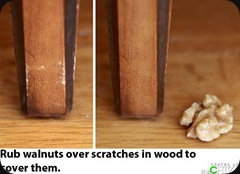 My room, uh I mean the guest room, is shaping up nicely.

You have been warned.

October is a threshold month, a stepping-out-of-summer-into-the-dying-season month. Dios de los muertos, the Day of the Dead is in October; All Hallow’s Eve, Halloween is in October. Days get shorter, nights longer… more hours to be afraid of being alone in October.

So I’ve decided to finish things I started this year. I’m beginning with left-overs from the fridge – either I eat it, or the garbage can eats it. Next, I’m going to install the faucet I got on sale that has been sitting in the bathroom for a month, dismembered and disconnected. Then I’m going to finish my list of things I want to finish before October is over.

But if you think about it, October is all about supernatural things lurking in the dark. It’s not often you hear about a ghost or spirit bugging people during the day. October things come out at night. Makes me want to leave all the lights on all day, every day of October so I won’t be in the dark. Somehow, by the time November comes around, the night isn’t such a big thing. Why is that, you think? Probably the moonlight reflecting off the evening snow so it’s not pitch black outside. Hey wait, this is Los Angeles! Oh yeah, we can see at night because of all those celebrities names in lights.

Thinking, like I do, about the membrane between life and… other states of being, I wonder if darkness really does play an important role. We close our eyes – darkness; we fall asleep – darkness; we leave Earth – darkness. It’s natural to believe that death is ALL about darkness. However, if that were true, near death experiences (NDE’s) wouldn’t include the light at the end of the tunnel, would they? Or have these almost dying people gone to the Pearly Gates and seen inside? Hmmm… kinda supernatural.

Some scientists believe that the brain, sensing it’s immanent demise, releases a “flood of euphoria-causing endorphins”. I don’t buy that. Living beings are programmed to rail against the Reaper. Even my poor parakeet fought his end with a disturbing display of Death-Throws. Where were those the euphoria endorphins then?!

A Dutch study published in a 2010 Clinical Care Journal suggested that religious, young, female victims of near death were more likely to see shining lights than those who feared death. That would indicate that death lights are psychological and more in the realm of the brain than in the Hereafter.

Or since we are primarily seeing beings, if we can’t see it we either don’t believe it or, we are afraid of it. The suspense is just too great.

Then I am reminded of those science shows that explain how light is both a particle and a wave, and how it acts remarkably indeed, when it “thinks” it’s being observed ( http://www.youtube.com/watch?v=DfPeprQ7oGc ). That’s weird enough to trump the After Life!

So if we are built to not want to die, and we’re afraid of the dark, do we instinctively think the dark is deadly dangerous? Is it? If it’s not, then why are so many of us afraid of it? Things that go bump in the night do that because we can’t see them and we’re up and moving around in the dark. Simple.

Enough of this musing… it’s time to get back to my movie. Can you please turn out the lights when you go?