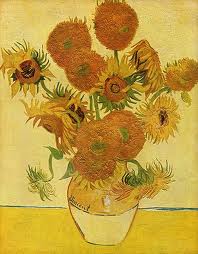 I’ve often wondered about that room; what would inspire a painter to use his single room habitat as his still life? To emphasize how still his life was, at the time? Or was it peaceful for a change? Did he love it, or want to share it?

But that’s it – finding one’s inspiration where it lies.

My sister gave me a plastic shopping bag with scenes of life in London on it. It’s my favourite way to shop. Yesterday my dad saw it and practically stole it from me. “You can have it back when I’m dead.”

That’s the other end of it – the appreciation.

If you ask an artist why he or she painted ‘that’, they don’t say, “because I thought you’d like it.” They tell you it affected them on a deep level they can’t explain. It’s this deep level that keeps me questioning: Is that ‘place’ where our spirit is, or are we lacking a sense like smell or ESP? Is it a means of communication that only our unconscious mind can read?

The more I think about it, the less I’m sure I really want to know. When I appreciate something, I say it’s divine, heavenly… but these words bring back the thoughts of the spirit – that ‘thing’ that never dies, the part of us that galavants about the universe at night, leaving our body vulnerable and close to death, in our bed. The part of ourselves that maybe ‘lives’ forever, whatever that means. Kinda scary.

Looking at and appreciating art is, however, not creepy so I think I’ll stop the soul searching for the day, look at an art book, brush my teeth, and go dream.

I’m in Vegas this weekend with friends, and we’ve been out on the town (in the heat) and eaten our fill of restaurant fare, so tonight we stayed in the condo. 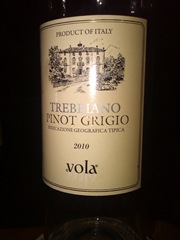 I made a faux Chicken Marsala – which was pretty tasty. Either that, or we were really hungry!

Normally, this dish is served with a bottle of wine. We drank three… three different kinds. (Is that ok?) All were inexpensive – an unbelievable $1.99 from the Las Vegas Trader Joe’s (though not marked TJ’s), and all were good! Products of Umbria, Italy. We started with a 2010 Vola Trebbiano Pinot Grigio before the table was set, had a 2010 Vola Sangiovese with dinner, and drank Cupcake Chardonnay for dessert, also from TJ’s which I brought from Los Angeles, and goes for $9.99. My mom liked it and got me a bottle, bless her heart. The label says citrus-y with a hint of vanilla. While I could tell there was something sweet-ish in the flavour, to me it came across as a sweet bark flavour, like cinnamon but not cinnamon. While I was deciding, up came that Chardonnay oak that I love. Nice.

For background music and entertainment, I put on a travel video of Southern France and all were happy. Don’t worry, it’s alright to mix cultures. I’m American with a European upbringing and I say it’s okay.

But I’m thinking you might be wondering, “What exactly is faux Chicken Marsala?” Before we get into that, I want to tell you a cooking secret: whatever you cook, the food always tastes better if the chef has a glass of wine first.

Having no idea what I’m going to make, I check the fridge for supplies. We had boneless, skinless chicken and some grapes – three colours, in fact. I found a box of raisins, and thankfully there were onions.

I sauté at least three loosely chopped onions in olive oil and butter in a pot while browning the chicken in a skillet, also with a bit of olive oil and butter. To the onions, I added grapes, raisins, bit of pepper and any other seasoning salt I could find (I found Lawry’s) but not much or it will toughen the meat and taste commercial. When the chicken begins to stick to the pan, add enough white wine to sizzle the chicken loose and make a bit of sauce – about two glasses of white wine. Reduce by half, for taste and thickening. Add the chicken and juices to the onion mixture and lower the heat to medium. Add a bit more wine to the skillet and gently dissolve the brownings into the wine and add it to the main mixture. I thought it needed a bit of sweet and was lucky to find some syrup. About 3 or 4 tablespoons did the trick. So far, so good, but it lacked colour. Aw, hell, add some red wine until it looks right – a glass of that Sangiovese, please.

It was getting hot in the kitchen so I let it simmer while we hung out on the balcony overlooking the inviting swimming pool and talked about why it’s closed for the summer.

Time to eat. We lit the candles and served the chicken with potatoes and veggies. Oh yeah, and the wine.

A few hours of Fringe reruns in anticipation of the new season and my friends are off to bed. Not me, though. I’m staying up to enjoy the storm, watching the jagged bolts arc the sky reflected in the pool and listening to the deep sounds of boulders falling from heaven roll about the open desert. The bit a rain that was squeezed from the clouds evaporated in minutes.

The end of a perfect Vegas day.