I was reading about the tunnels under the Giza Plateau, a relatively new archaeological find in Egypt, when I was intrigued by another link. It took me to information about an early Egyptian ruler, the Scorpion king. Yep, he really existed, though not as the movie portrays him.

In April of 2009, Archaeologist Patrick McGovern and colleagues have found a cache of wine jars in Scorpion’s tomb that contains herbs and tree resins. They believe the additives were for medicinal purposes. 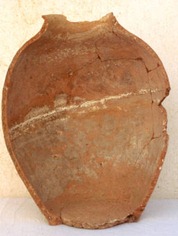 biomolecular analysis, they are attempting to recreate the recipes of the wine find. The purpose? Maybe the ancient Egyptians were on to something – like a cure for cancer. While the concept of utilizing archaeology to help cure disease is thrilling, I can’t help but wonder why the Egyptians felt a dead person needed medicine.

Evidence is looking like these remedies are as much as 3350 B.C. Interestingly these appear to be imported wine concoctions as the Egyptians did not, at that time, produce their own wine. If you were an Egyptian ruler and imported medicated alcohol, wouldn’t you try to preserve peace with that exporting nation? Sometimes I think we could use a little bit of that wine, and the political friendship it fostered.